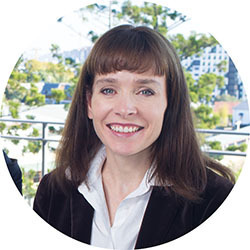 Dr Allwood’s work as an astrobiologist began by her exploration of the most remote wilderness on earth in search of microscopic fingerprints of life by using a tool called the PIXL, which she invented as a postdoc: It fires a hairs-width x-ray beam at a rock.  This energy stirs up the atoms on the surface which then shoots back their own distinct x-rays.  Combined, these x-rays create finely detailed maps of rocks, potentially revealing the past presence of microbes.

In 2013, Dr Allwood was awarded NASA’s Lew Allen Award for significant individual accomplishment and leadership in scientific research and technological innovation for her part in developing a micro-XRF instrument capable of analysing rocks and soil encountered by the rover.

In 2015, Dr Allwood was name QUT Outstanding Alumnus of the Year, after winning the university’s Science and Engineering Faculty award.

Dr Allwood currently has an incredible career at NASA’s Jet Propulsion Laboratory.  She is the first woman, and the first Australian, to lead a team on a NASA Mars mission in her role as Principal Investigator of PIXL on the Mars 2020 Rover mission, one of seven sophisticated scientific instruments that will be loaded onto the rover.  Operated remotely by her team back on Earth, it will analyse the chemistry of Martian rocks in finer detail than ever done before.

Dr Abigail Allwood was honoured with the 2015 Principal’s Award for Excellence for her outstanding contribution as a world-leading geologist, astrobiologist and research scientist.