We were delighted to read of current student (Lyla Jansz) who connected recently with OG Dr Abigail Allwood (Class of 1990). Inspired by Dr Abigail Allwood's achievements as outlined in the recent Connections Magazine, Lyla wrote to Dr Allwood who took time to write back to Lyla in a lovely example of Old Girls supporting the current students.We thank Somerville House for their permission to share the below story.

Flipping through the latest edition of the School’s Connections Magazine, Year 6 student Lyla Jansz spotted a congratulations piece on Old Girl, Dr Abigail Allwood (Class of 1990), inspiring her to write a letter to the first female and first Australian principal investigator on a NASA Mars Mission 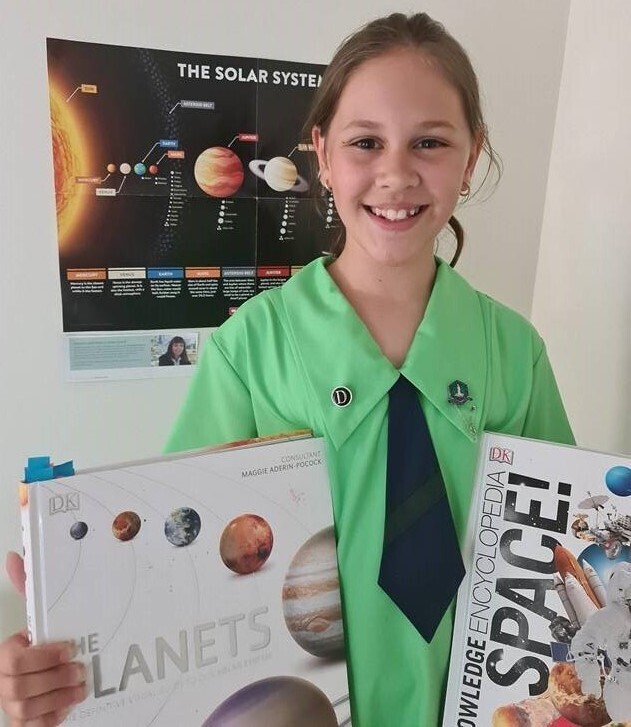 Lyla’s interest in geology has grown over the past two years, and studying the Solar System in Year 5 paired the two passions together. In her letter, Lyla expressed her admiration for Dr Allwood and mentioned the special book she has created to keep her notes and record important information.

“I was excited to hear about you being the first woman scientific lead on a Mars mission, and my excitement grew when I found out you were a Somerville girl, as well as a geologist, astrobiologist and NASA research scientist,” Lyla said.

"I hope to one day become a planetary geologist and want to thank you for inspiring me. I will be following the Mars Rover 2020 mission and taking notes," she said.

“I hope and look forward to meeting you one day.”

Dr Allwood’s congratulations excerpt now takes pride of place on Lyla’s wall, and with some connecting magic, Lyla was thrilled to receive a response from her inspirational Old Girl.

Abigail thanked Lyla for the nice email and photo, and explained to Lyla how busy the next few weeks would be for her, preparing for the landing on Mars on Thursday 18 February.

“The landing is going to be pretty exciting (for you) and scary (for me!) … you can watch it “live” on NASA TV - noting that it takes several minutes for the signal to get from the spacecraft on Mars to us here on Earth, but it will be broadcast as soon as it gets to Earth; although it will be early in the morning for you,” Dr Allwood said.

“As a Geology student at University, especially in Australia, you’d find that most of your fellow students go to work for mining or oil companies. Thankfully, I had an offer of doing a PhD in Astrobiology at Macquarie University instead. In hindsight, doing the PhD was a crazy thing to do, as there aren’t many jobs for Astrobiologists...

But you know, if I only ever made sensible decisions, and didn’t listen to my heart, I wouldn’t be where I am now,” she said.

“Good luck Lyla, I hope to meet you one day.”

Connecting inspirational Old Girls with aspirational students builds upon the School’s mission to educate the future generation of fearless women leaders, which Dr Allwood and Lyla have demonstrated perfectly.

Lyla’s mother, Clare Jansz, expressed her gratitude to Dr Allwood and the School for making the connection a possibility.

“I discussed how busy Dr Allwood might be and that we may not get a reply at all. So to receive the beautifully written and encouraging email had us all in total shock,” Mrs Jansz said.

“After the disbelief, the squealing with excitement, the reading and the re-reading (several times) Lyla was and is beaming with a sense of pride and inspiration,” she said.

“It has sparked something in Lyla and she is more determined than ever to get to NASA one day.”

We love to hear stories of how our Old Girls are inspiring others.  Help us to stay up to date connect@somervillehouseoga.com.au.