With Remembrance Day approaching this Thursday, 11th November, 2021, we are delighted to share with you the captivating story of the Wilson family - five generations of Somerville House and a legacy of service. 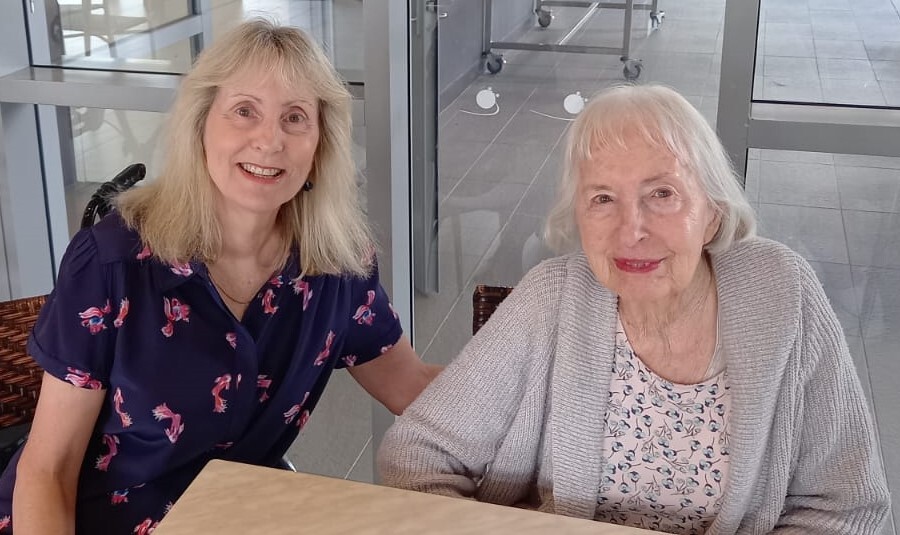 Rosemary Dwyer (Arrowsmith, Class of 1971), pictured above left with her mother Marty Arrowsmith (Wilson, Class of 1940), recounts her family history of devoted service to country, and the five generations who have attended or taught at Somerville House, starting with Wilhelmine (Minnie) Wilson (Class of 1902) to current student, Lucy Blair (Class of 2029).

Wilhelmine Jane (Minnie) Connah (Wilson), Rosemary's great aunt, attended Somerville House from 1899 to 1902 with the incredible honour of being the first dux of the school in 1900, and again in 1901 and 1902. Minnie Wilson continued her relationship with Somerville House teaching at the school between 1905 to 1909. Our records also reflect that Minnie was elected as Secretary of the Old Girls' Assocation in 1907 with her reporting at the first quarterly meeting held on 20th February, 1907 that "the O.G.A. had entertained their friends at a "Noah's Ark Evening" on November 30, 1906 when a very happy time was spent" (The Brisbane High School for Girls Magazine, June 1907 p.9). 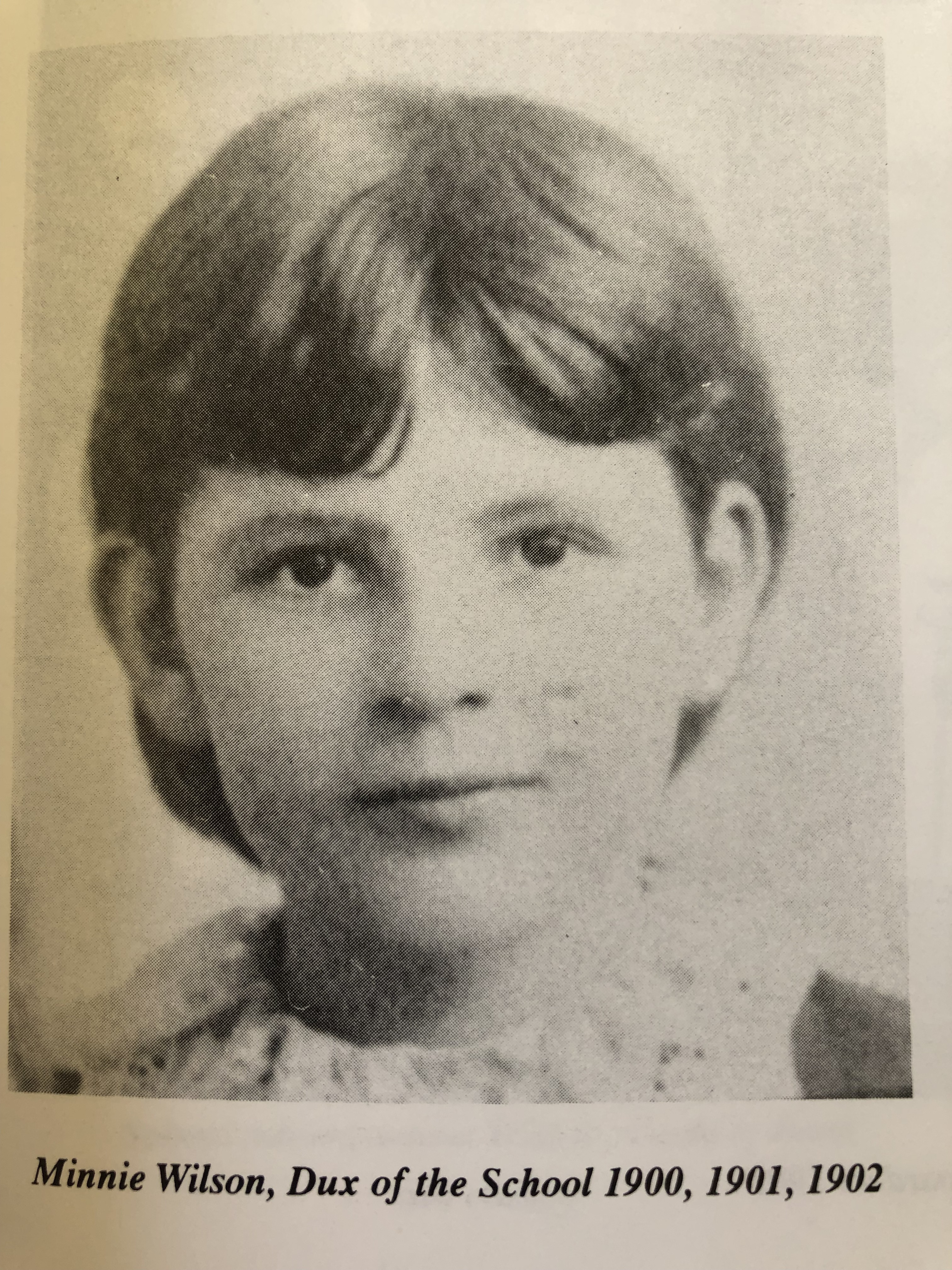 Image courtesy of "A Legacy of Honour"

Minnie's sister and great aunt to Rosemary, Grace Margaret Wilson (1879 - 1957) didn't attend Somerville House as a student, but taught there as a Junior Mistress from 1901 to 1905. Grace attended Brisbane Girls Grammar School where Miss Eliza Fewings was principal from 1896 - 1899. It is fascinating that a couple of years later Grace came to be a teacher at Brisbane High School for Girls (later Somerville House) under the leadership of Eliza Fewings. Grace had a distinguished nursing career, serving in both World Wars in the Australian Army Nursing Service (AANS). Grace was working as Matron of the Brisbane General Hospital when WWI began. 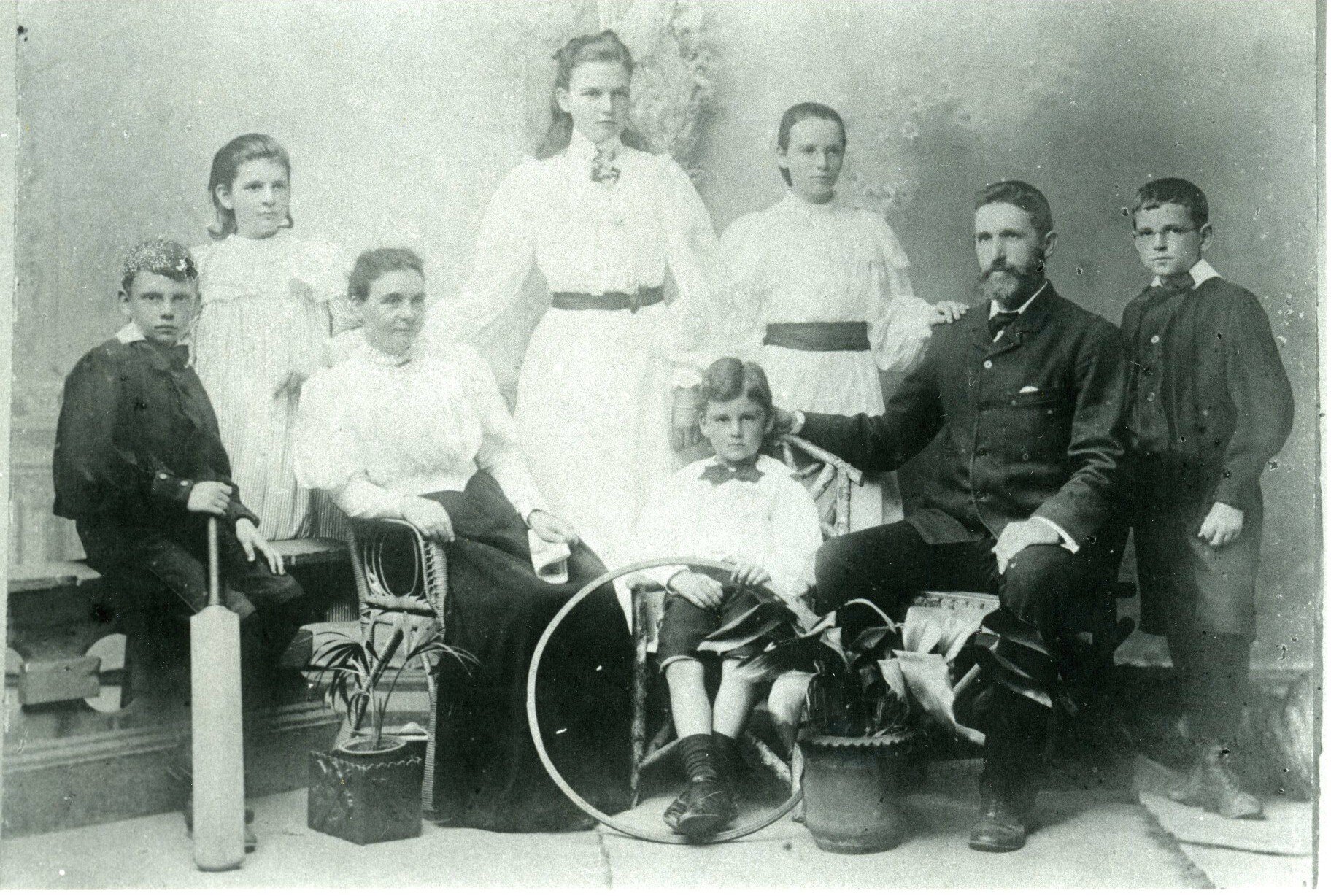 Family portrait - Grace Wilson pictured in the centre at the back as the oldest child and Minnie Wilson on left. Far left is their brother Roy Wilson (father to Marty Wilson). In front pictured with the hoop is Graeme Wilson. 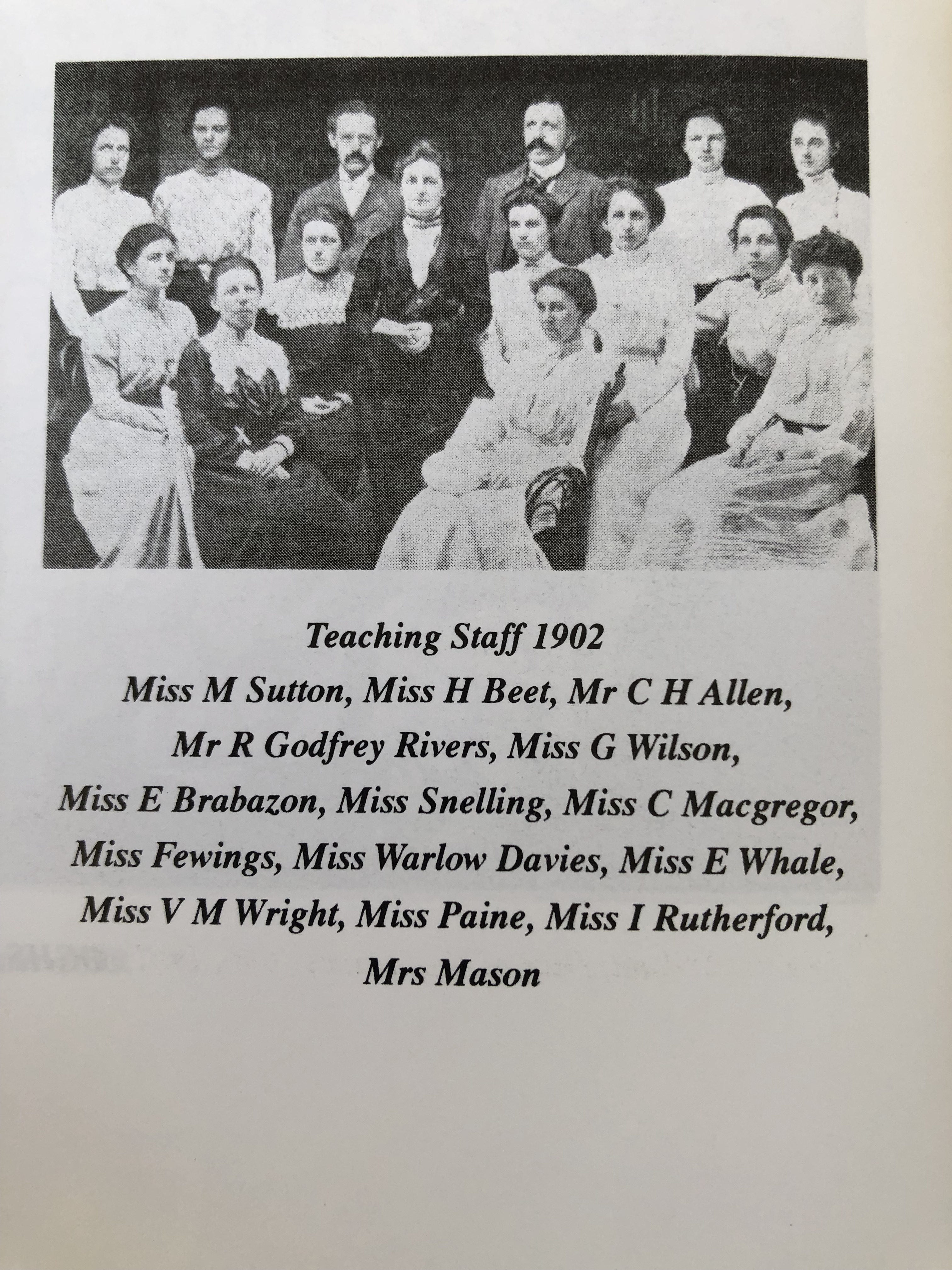 Image courtesy of "A Legacy of Honour" 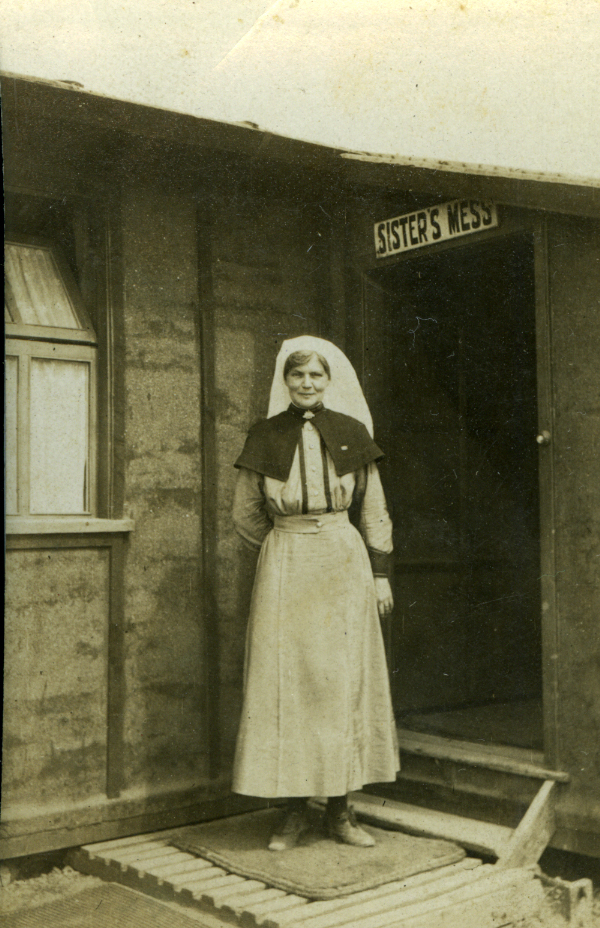 Joining the AANS in 1914, Grace left for England in 1915 as principal matron of the 3rd Australian General Hospital. In August that year, the Hospital was transferred to the Greek island of Lemnos near Gallipoli to treat Anzac casualties. Collecting her mail in Alexandria, Egypt, en route to Lemnos, Grace learned that her brother Graeme - a coporal in the Light Horse, had been killed at Gallipoli. 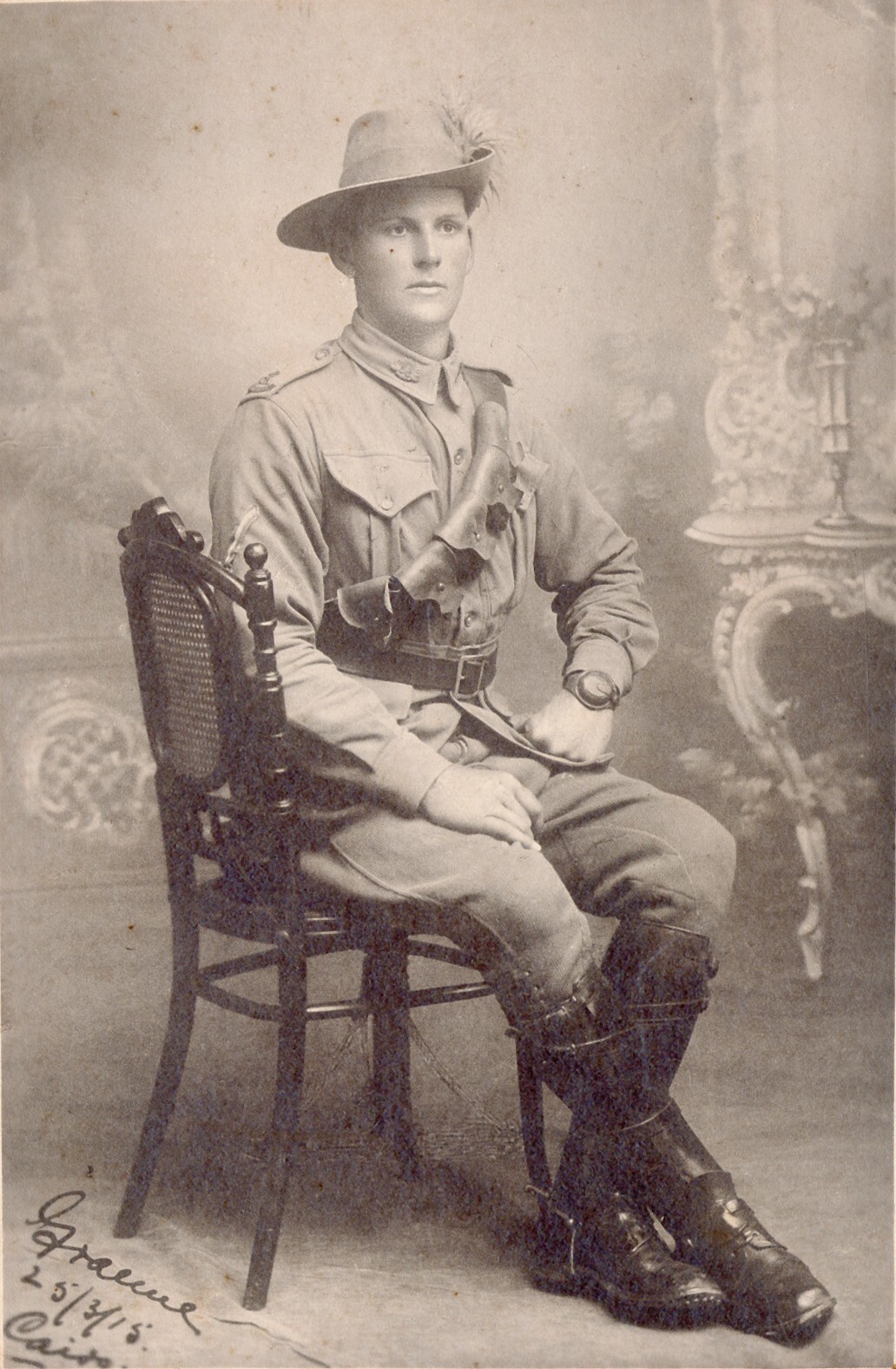 The legacy of the Australians still remains on Lemnos with an annual Anzac ceremony held on the island. In 2015 Rosemary Dwyer organised a group of 11 family members from Grace's relatives to attend the Centenary of Anzac commemorations held there, where they were guests of the Australian Government at official functions. Grace was described by the Director General of the Australian Army Medical Corps, as "the best of our Matrons, was Miss G Wilson". 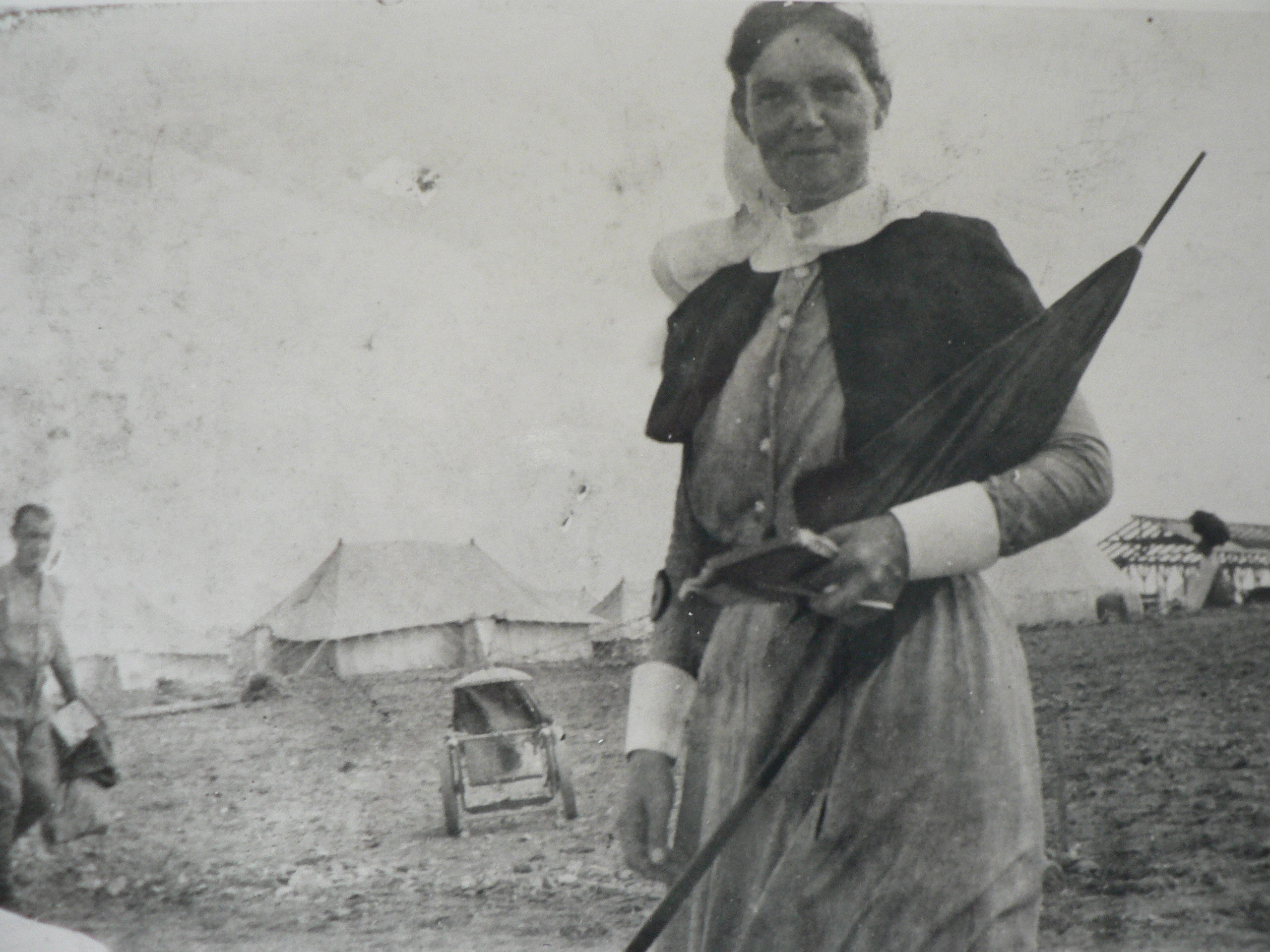 After Lemnos, Grace Wilson went with her unit to Egypt, England, and finally, France until September 1917, when she was posted to London as temporary Matron in Chief at Australian Imperial Force Headquarters. For her efforts during the war, Grace Wilson was mentioned in dispatches five times, awarded the Royal Red Cross, and made Commander (Military) of the Order of the British Empire in 1919. After the war, she took on the role of Matron of the Children's Hospital, Melbourne. In 1929 she was awarded the Florence Nightingale medal for her service to Nursing, and in 1933 was appointed Matron of the Alfred Hospital. Grace Wilson was appointed Matron in Chief of the Australian Army Nursing Service in 1925, a position she held until 1940 after the outbreak of WWII. She was appointed Matron in Chief, Australian Imperial Force, serving in the Middle East from 1940 - 1941, when she was forced to return to Australia due to ill health, but continued working as executive officer of the Nursing Control Section of the Manpower Directorate for the remainder of the war years. 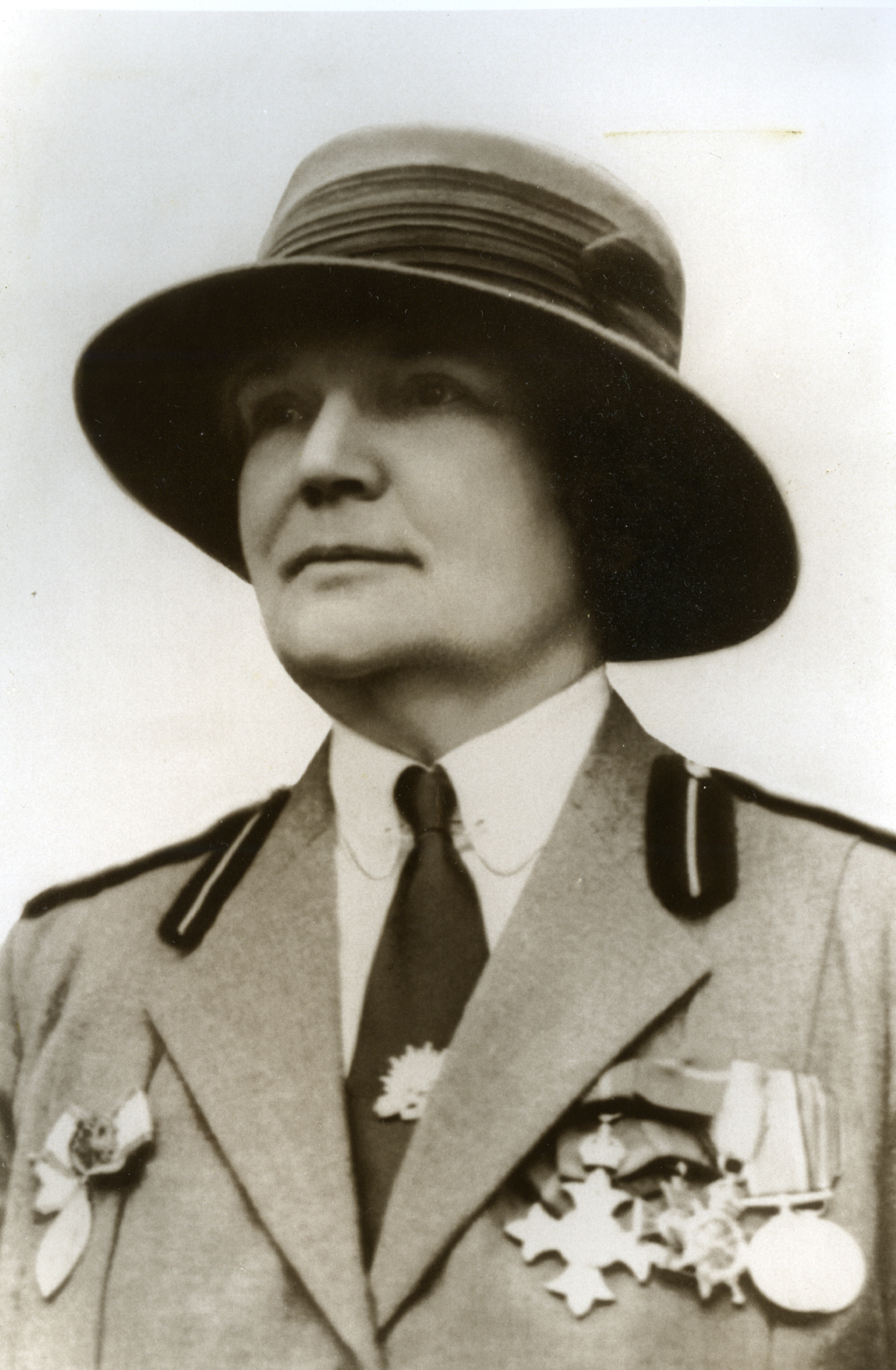 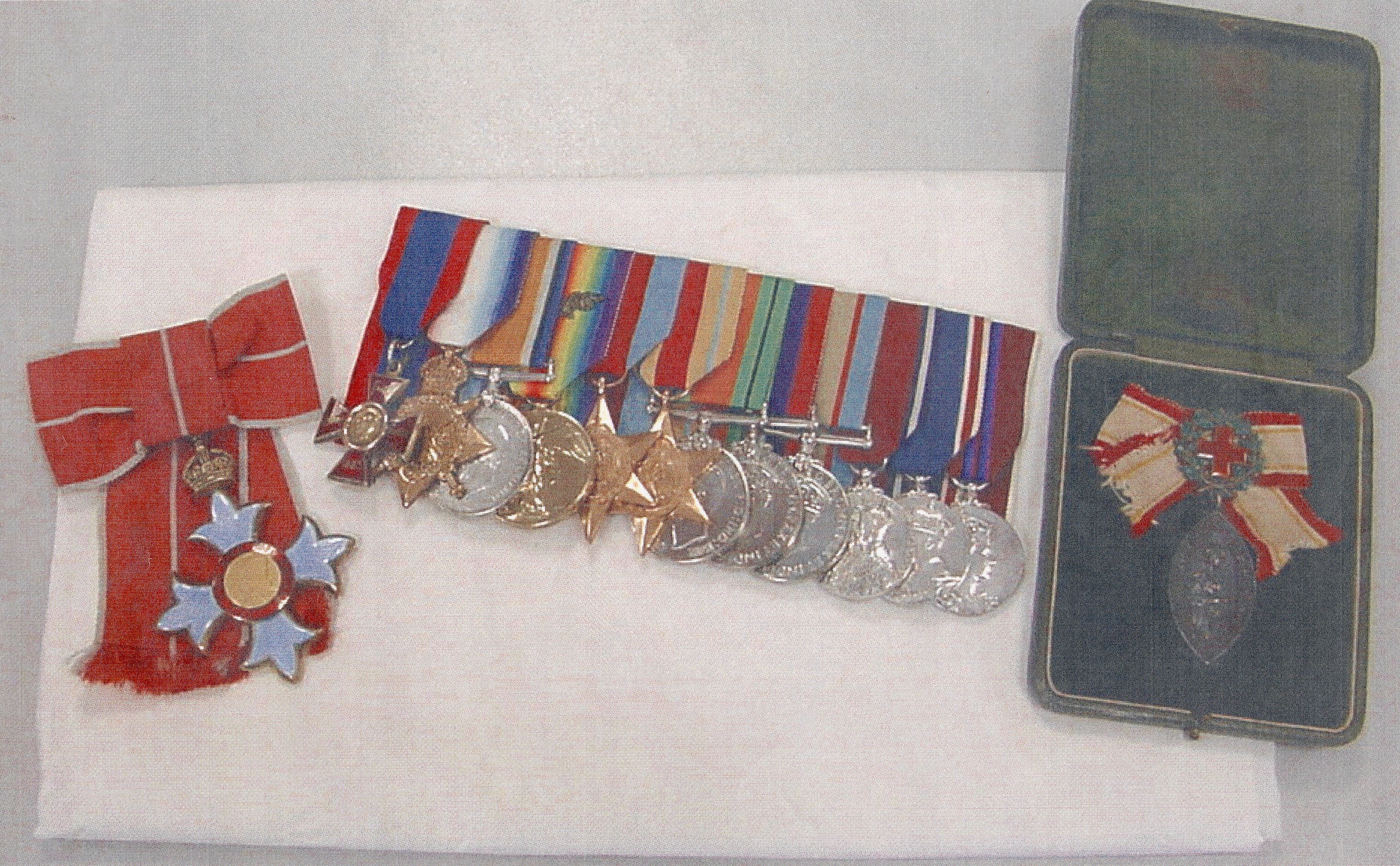 Grace Margaret Wilson and her medals

Even in retirement, Grace Wilson continued to be actively involved in activities for returned nurses and the RSL as well as the Girl Guides, Red Cross and nursing associations. In 1953, she was the first woman to be made a life member of the RSL. She died in Melbourne in 1957 and was remembered at a service with full military honours. 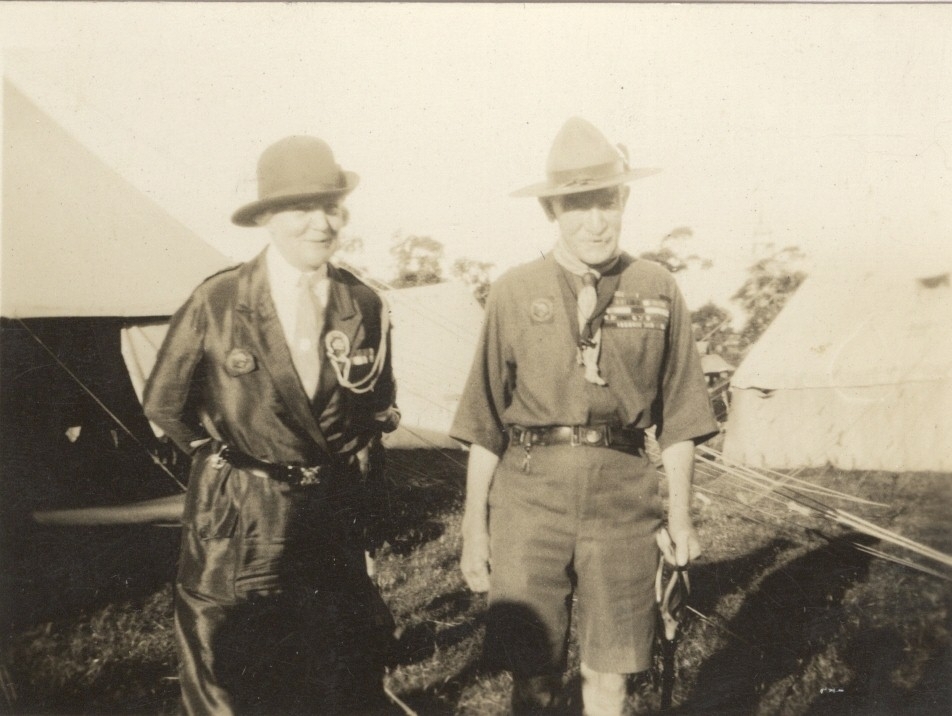 Grace and Minnie's nieces, Margaret Campbell Wilson (Class of 1937) and Martha (Marty) Frances Wilson (Class of 1940) both attended Somerville House with Margaret (Rosemary's aunt) attending from 1934 to 1937 and Marty (Rosemary Dwyer's mother) attending Somerville House from 1937 to 1938. Marty and Margaret travelled each day from Victoria Point to attend Somerville, referring to this substantial journey as the "Service Car".

Marty Wilson left after Junior during the outbreak of the war. While Somerville House had offered her a full scholarship to continue her studies, family responsibilities took precedence at the time. Marty served as a member of the Voluntary Aid Detachment with the Blood Bank on the Indonesian island of Morotai. We have included Marty's details in our "List of Old Girls Who Served in WWII" (HERE - Please note this list is best viewed from a desktop rather than a mobile phone or ipad). After training in blood collection skills and marching (she says to instil discipline and obedience) in Brisbane at Camp Yeronga Park - a military camp set up by the US Army in 1943, at the age of 21 she joined the 61,000 personnel who landed on Morotai in the latter part of 1944. She worked with the "vampires" as they called themselves, to take blood from the well soldiers to give to the sick or injured soldiers in the 1,000 bed hospital. She says it rained every day; they put sacking on the floor of their tents to improve conditions; and collected rain water in a drum to wash their hair. Her pay book kept details of initial payments of 3 shillings and 10 pence, rising to 6 shillings and 6 pence - payment being issued at the end of the war. She served on Morotai for over a year, being there for a visit by the British performer (Dame) Gracie Fields; and for the surrender ceremony of the Japanese 2nd Army that took place on the island on 9th September,1945. This was a week after the famous signing on board USS Missouri. 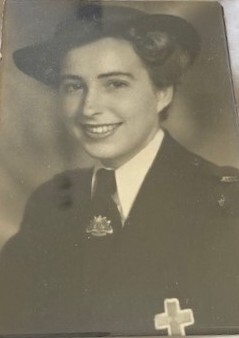 Marty's husband, Captain Warwick Arrowsmith (1916 - 1996) was a record-holding middle-distance athlete, who held the rank of Captain and served as a Medical Officer during WWII in the Middle East, SE Asia and New Guinea. 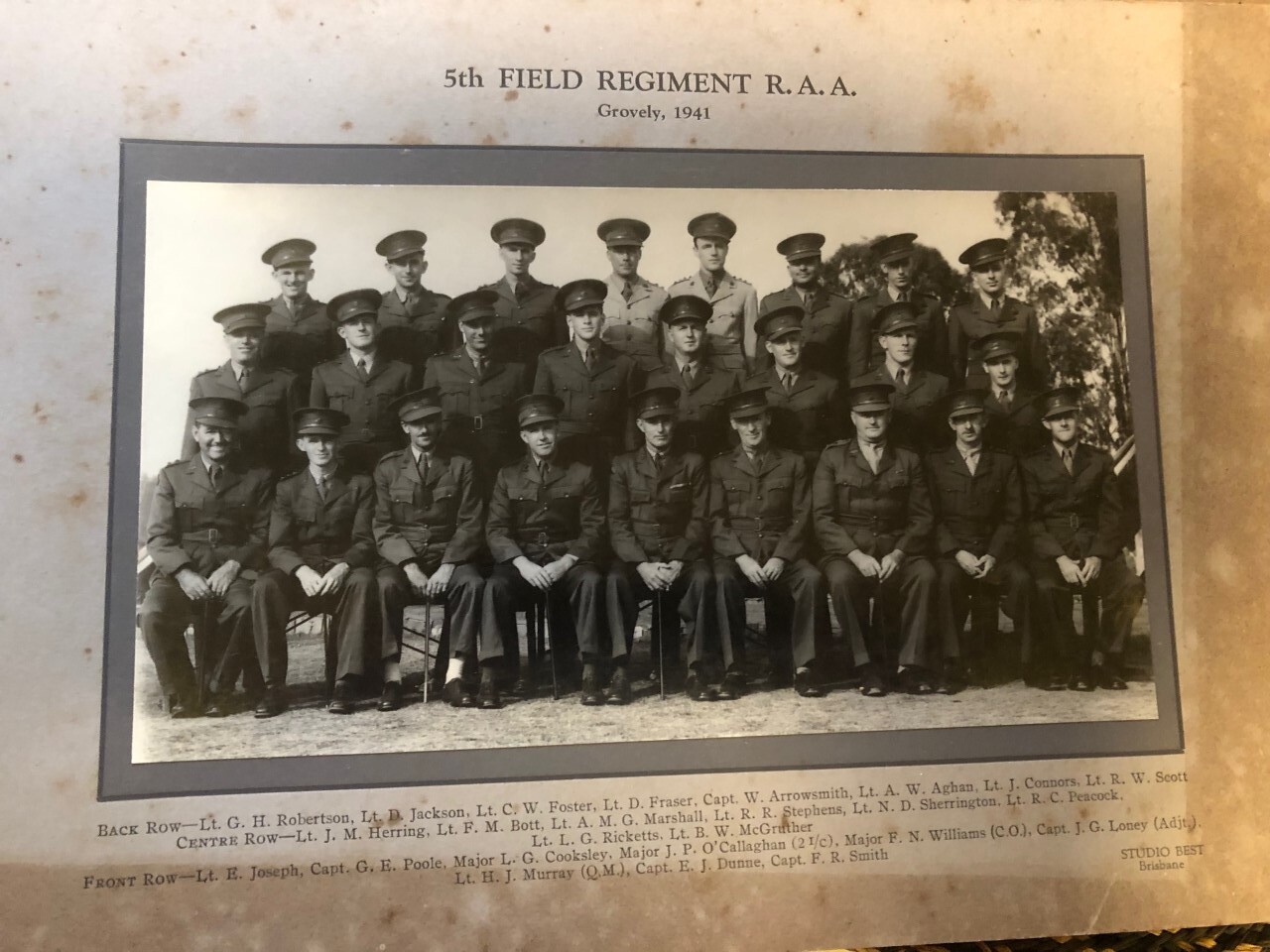 Marty and Margaret's brother, Graeme Langdon Wilson (1917 - 2016) was a talented athlete, a Rhodes scholar, a highly respected academic, and an ex-POW and survivor of Changi and the Burma Railway. His daughter, Barbara Pascoe (Wilson) (Class of 1968) also attended Somerville House from 1964 to 1966. 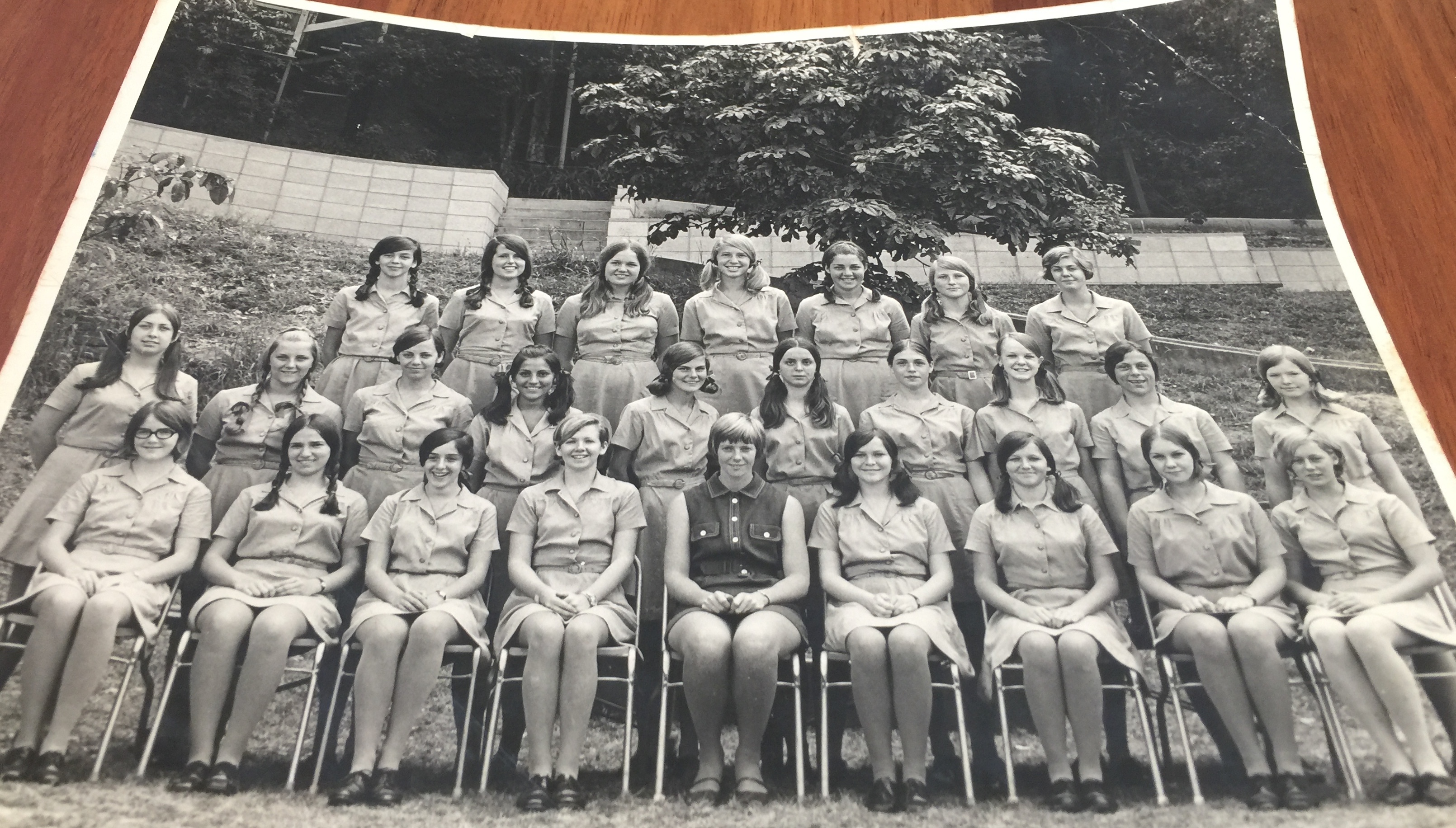 Class of 1971 with teacher Libby (Elizabeth) Davis (Shellshear). Helen Wilson is in the back row, 4th from left. Photo taken 1969.

Also featured in the above photo is Helen Wilson who attended Somerville House from 1967 to 1971. Brothers John Pearson Wilson (great grandfather to Rosemary Dwyer (Arrowsmith) and Lindy Stewart (Arrowsmith) and Alexander Brown Wilson (great grandfather to Helen Wilson) came out with their family from Scotland in 1864 - inspiration for the 150 year Wilson family reunion held at Somerville in 2014. Helen's two sisters, Robyn Wilson (Class of 1975) and Jen Conde (Wilson) (Class of 1976) also attended Somerville House.  Their mother Jocelyn Wilson (Cribb) (Class of 1949) shares her own family history of three proud generations attending Somerville House. Their father, Ian Alexander Wilson, was just 'of age' during WW2 and trained with the RAAF as a pilot, qualifying as the end of the war was nearing. In 1945, in search of active duty, he hitchhiked up to the Philippines and flew very briefly with US Navy Patrol Bombing Squadron VPB-117. Tokyo Rose called them the 'Blue Raiders of the Sky' because of their camouflage paint. Despite having been christened by Tokyo Rose, the squadron liked it and took on the name 'Blue Raiders'.

Marty Wilson's two daughters Lindy Stewart (Arrowsmith) (Class of 1969) and Rosemary Dwyer (Arrowsmith) (Class of 1971) both attended Somerville House from 1964 to 1969 and 1965 to 1971 respectively.  Their cousin, Barbara Pascoe (Wilson)  (Class of 1968) also attending from 1964 to 1966. Rosemary recalls winning the Somerville House 100 year celebration cake raffle consisting of 3 separate fruit cakes in the shape of 100 resulting in her making special arrangements with Qantas to fly the cakes back with her to Sydney! 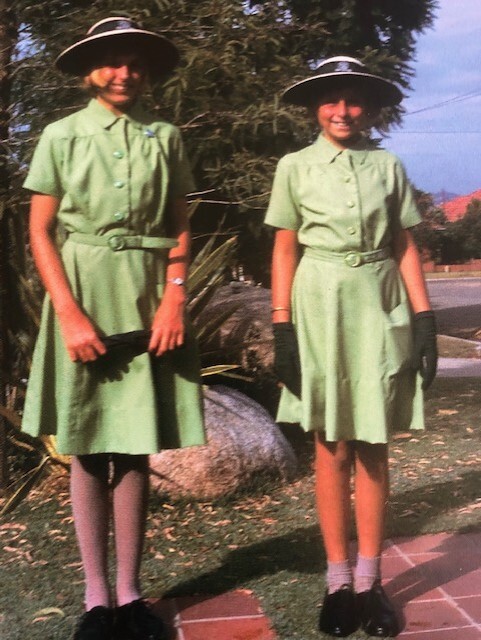 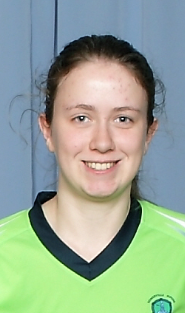 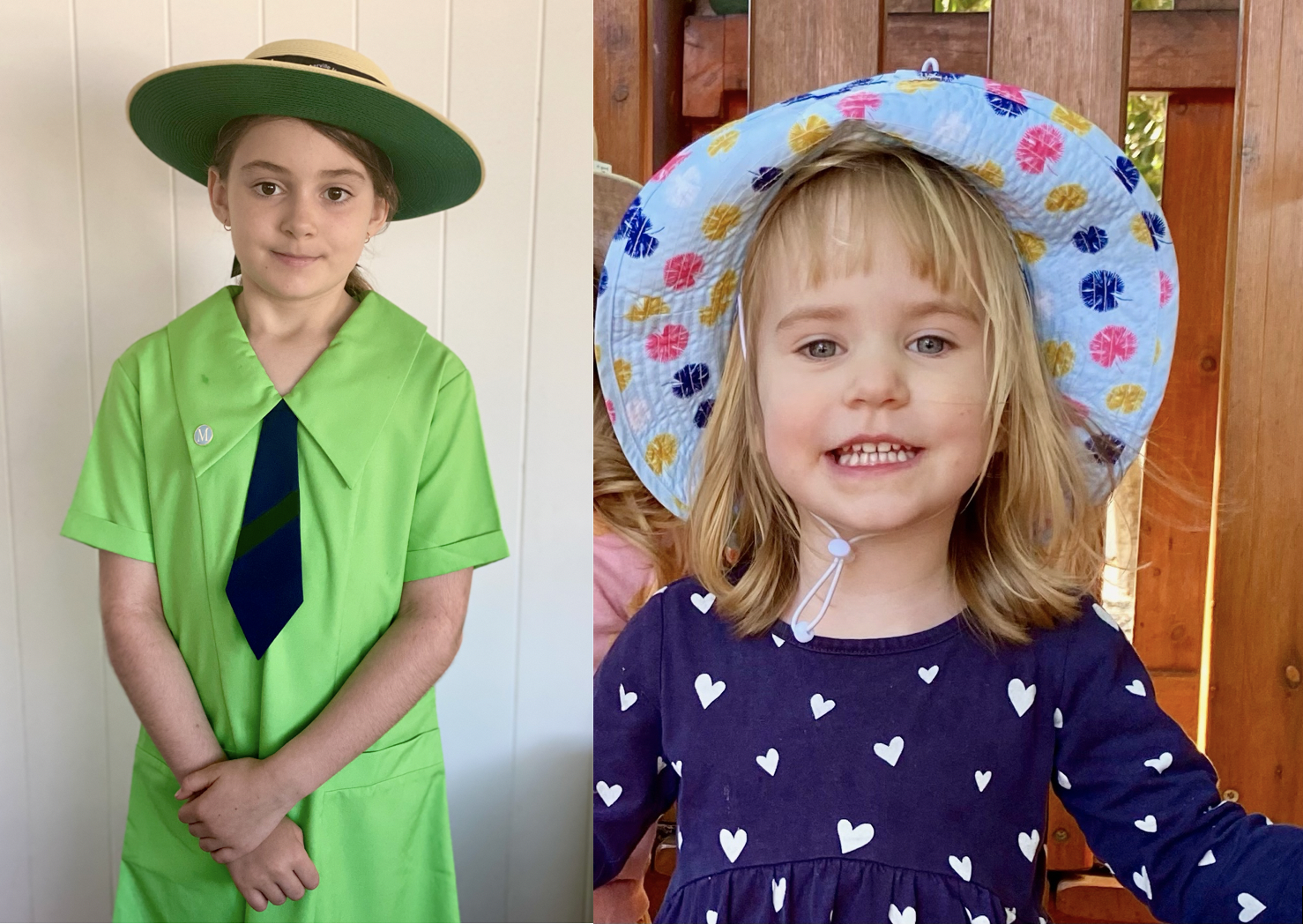 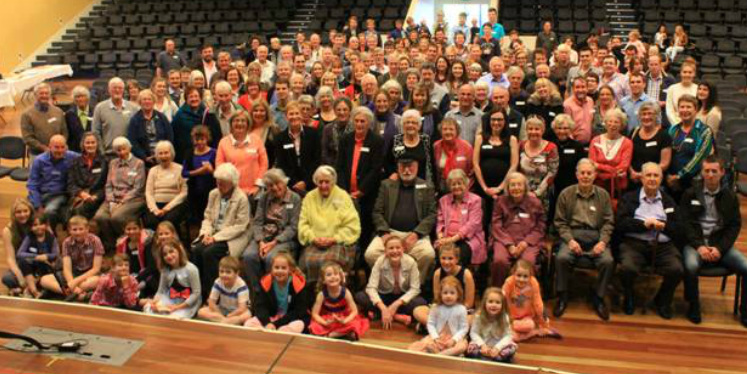 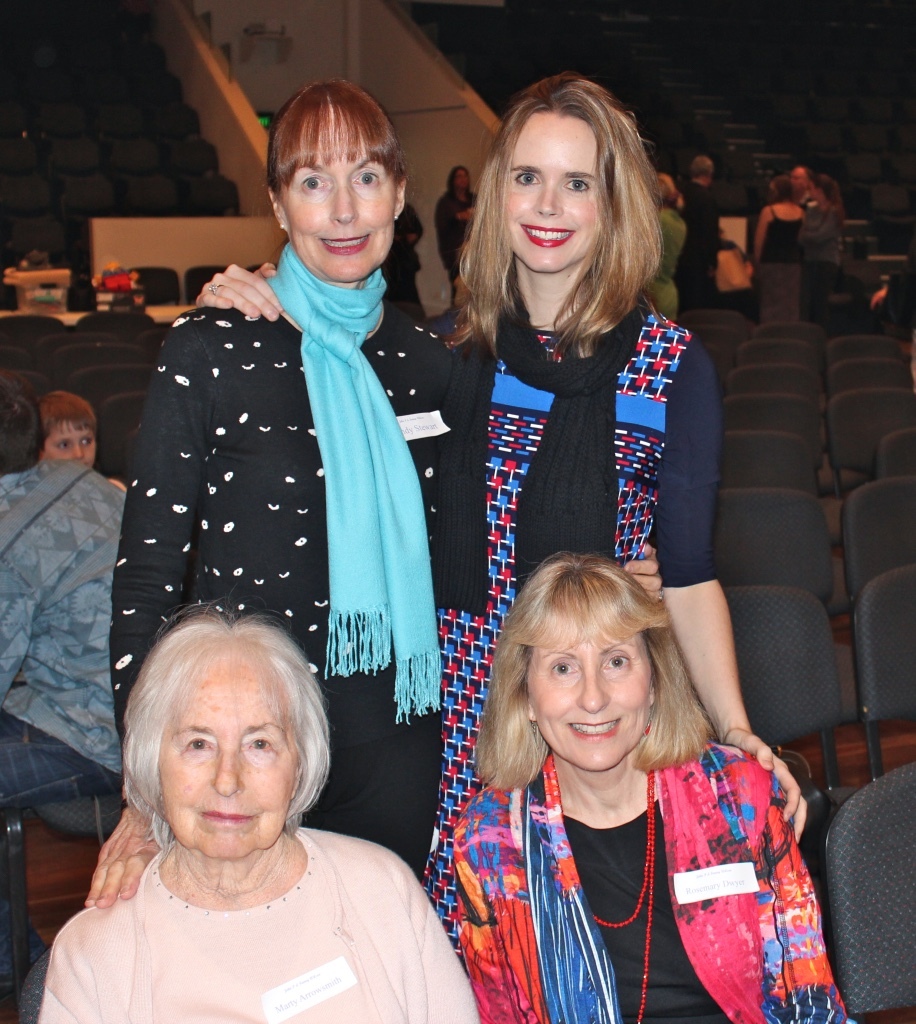 Rosemary Dwyer (Arrowsmith) recently had the opportunity to travel from Sydney to Brisbane to celebrate her mother, Marty Arrowsmith's (Wilson) 98th Birthday. This was an extra special treat given the difficulty of travelling interstate presently due to Covid restrictions. 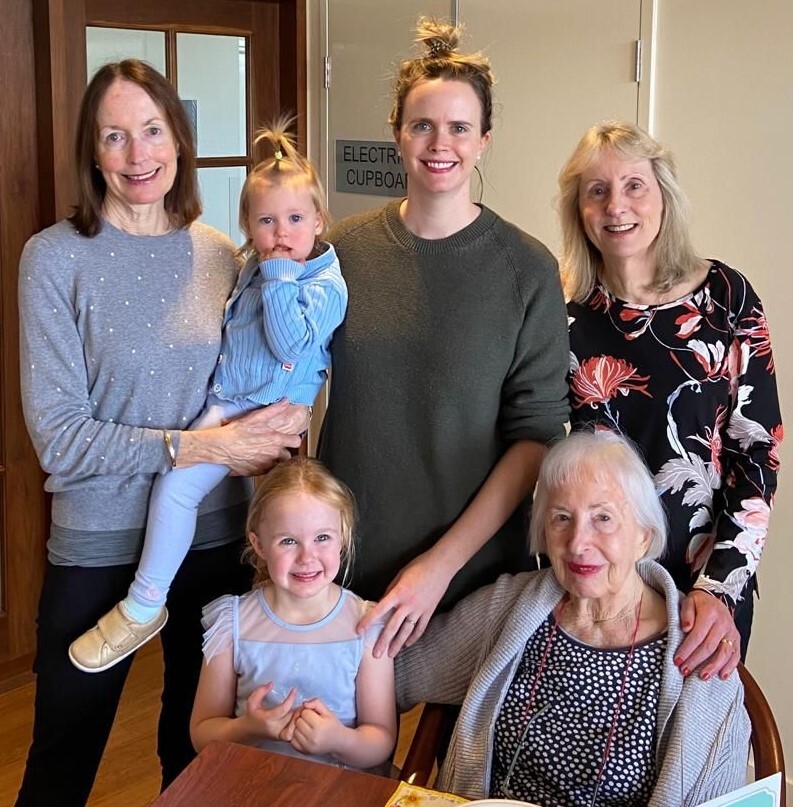 We share the list of Wilson family who have either attended or taught at Somerville House below (while considerable efforts have been made to ensure this list is complete please contact us should you have additional information to add to this incredible family tree);

The Wilson family history exemplifies the honour in service to country and an enduring love of Somerville House for five generations and we hope many more generations to come.

We invite all Old Girls to take part in a minute of silence at 11am this coming Remembrance Day, 11th November, 2021 as we remember all Australians who have given their lives to protect us, and the courage and sacrifice of those who have served.